I recently saw Mawdryn Undead again after quite a long time away from it. Ever since I first watched it, I’ve had a myriad of feelings about the story ranging from amusement to disgust, but my middle ground tends to land on frustration.

This story is major point of contention in the Doctor Who fandom, largely because of the dating of the thing. The UNIT dating controversy had long been a continuity issue by this point, but somehow, in trying to fix it, this story manages to actually make it worse. Which, when you think about it, is rather a spectacular feat. It’s also why probably every fan of the classic series has their own headcanon about when each UNIT story really takes place. Because you have to in order for it to make any sort of sense.

I don’t want to be overly negative about it (though I probably will anyway in just a moment). There are some good things about Mawdryn. I enjoy the bit with the car at the beginning. The fact that the Brig sort of has his own Bessie is quite funny to me.  A school boy stealing a car is one of the more interesting companion introductions, I think, and establishes very quickly that there is something a bit off with the new ginger boy we’re having flung at us. As an introductory story, I think it made Turlough a stronger character simply because we were kept guessing about whether or not he would actually make a solid attempt to kill the Doctor. I liked that uncertainty because it kept him (for a short while, at least) from becoming just another orphan in the Doctor’s ever-growing collection. The Black Guardian is always a laugh as well, though perhaps not for the right reasons. Which is why I’m not really going to talk about him. He’s there. He has a chicken on his head. That’s really all that needs to be said about it.

And then there’s the Cult of the Fabulous Robes (that, you know, grew organically out of their flesh but whatever). Mawdryn and his merry band of mutants are interesting, if a bit horrific. Their story is a sad one and definitely one of the most creepy in the show’s long history. It’s like if the Doctor had stumbled into The Walking Dead in the 1980s. Okay, so they weren’t eating people, but still. Presumably, they’re meant to teach us a lesson about the dangers of genetic modification and the quest for immortality and all that jazz. Well, if that’s the case, I’m totally convinced. If that’s what immortality looks and feels like, then I’m out. I can make my own frilly robe, thank you very much. 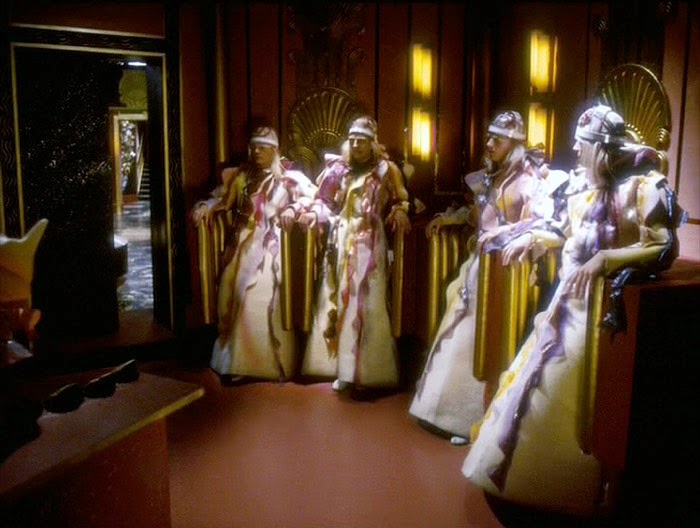 There’s another mention of the Blinovitch Limitation Effect in this story too. It’s established that when two versions of the same person (from different times) make physical contact, there is a physical reaction–in this case, an energy discharge and the Brigadier’s memory loss.*

Which leads me to the best thing about Mawdryn Undead. It gave us the return of Nicholas Courtney after eight years without our beloved Brigadier.** And not only that, but he was in it twice (again).

Two Brigs for the price of one. I’m good with that.***

The problem I do have with his reappearance, however, is that he sometimes seems grossly out of character in this story. Don’t get me wrong, I’m all for character development and I love that Nick Courtney always wanted to make sure the Brig was truly coming across as a real human being. That said, I still think there are moments that don’t gel at all with the man we knew. Yes, the Brigadier is in a much different place in his life than the last time we met him, and the way he was written was partially accounted for by his suspicious memory loss.  If you’ve ever read any of the novels featuring the Brigadier, it’s no secret that life has kicked the shit out of him a few times. Maybe more than a few, really. I don’t want to spoil anybody, but if you’re looking for an example or two, I suggest reading Andy Frankham-Allen’s The Forgotten Son and Gary Russell’s The Scales of Injustice.****

Taking those events into consideration, however, it still doesn’t add up to what’s going on with him in Mawdryn. He’s “retired” from UNIT following a nervous breakdown. If you’ve followed his story, even just on television, that should immediately set alarm bells off in your head. And while I understand why his living accommodations are the way they are, they still make me sad. It makes me think that Fiona must’ve basically ruined him in the divorce, in addition to taking his daughter away from him, and that breaks my heart. But even factoring that in, his demeanor doesn’t quite ring true for me. He’s too sad and too angry. That stiff upper lip isn’t what it was, and that seems unlikely to me.

Maybe it’s because his mustache is gone.

I also never imagined that, even as a teacher at a boys’ school, the Brigadier would be quite so cruel to a student. I realize that it was probably partially due to the environment and the time, but I still feel like going so far as to tell Ibbotson that he’s “disgusting” seems a bit harsh and not in keeping with the Brig’s character.

“If you took more regular exercise, Ibbotson, not only would your body be less disgusting, but you’d enjoy a healthier imagination.”

But maybe that’s just me.

He’s still quite sexist as well, but that fits in with the way he was originally written. So from a continuity standpoint, I have no problem with that. Yes, it’s a bit aggravating, but at least it’s true to the character. I do kind of love that the first thing he remembers about Tegan is that she was attractive, because why not? In an odd way, it makes him more human. We got very few hints about the Brigadier’s personal life in the context of the show (aside from his date during The Dæmons and discounting the books and audios), and nothing really concrete until we met Doris several years later in Battlefield.  So do I mind that Tegan apparently had a drink with him at his house when she went looking for help? Absolutely not. It’s a silly thing, but it makes me giggle every time.

Also, I’m one of those saps who tends to really enjoy callbacks in the show, but even I felt that the montage of the Brigadier’s memories returning to him is a bit much, but he does become a bit more himself after the fact.

BRIGADIER: Someone just walked over my grave.

THE DOCTOR: Perhaps it was a Yeti, Colonel Lethbridge-Stewart.

I imagine any of the characterization issues could’ve been down to a writing choice, a directing choice, or even an acting choice just to show the contrast between the two Brigadiers. I can understand the reasoning behind it, but it doesn’t stop me from thinking that it maybe could’ve been handled a bit differently. Maybe in a way that was slightly more in keeping with the history of the character. And though I do have some affection for this story (only because it brought back my favorite companion), it’s also said companion that completely pulls me out of the story to the point that I get irritated with it.

Which brings us back to the headcanon. Do I have one for the placement of basically every single UNIT story?

Yes. And I thought that would be enough.

But the more I watch/re-watch and the more that I read the books or listen to the Big Finish stories, the more complicated the construct becomes. The UNIT dating controversy isn’t just about UNIT, it’s about the Brigadier’s entire life.

Personally, I prefer the timeline set up in The Forgotten Son. This means, though, that the timeline of other stories like Deadly Reunion are thrown completely out the window. And I’m 100% okay with that.

It’s no more problematic than saying the Brigadier retired in 1976 when the earlier days of UNIT and the events of The Invasion were supposed to have taken place in 1979. There are about a million issues around the dating of The Invasion anyway so it was all doomed from the start, really.*****

Anyway, where does Mawdryn Undead fit into this? To be brutally honest, it doesn’t. As much as I believe that there are good things about the story and things that I enjoy, it just doesn’t work for me. Therefore, in my own universe, it sits outside the realm of canon and neatly on the AU shelf beside Deadly Reunion and The Shadows of Avalon.******

Denial is a wonderful thing sometimes, isn’t it?

* A concept we later revisit with Rose in Father’s Day, also written by Paul Cornell.

** His last appearance was with Tom Baker in 1975’s Terror of the Zygons.

*** Not as spectacularly executed as in Inferno, but I blame that on the writing. Still, multiple Brigadiers could never be a bad thing in my world. Especially in the case of The Brigadier and the Brigade Leader.

**** I also suggest Paul Cornell’s The Shadows of Avalon, as well as Deadly Reunion by Terrance Dicks and Barry Letts. These stories in particular are undeniably entertaining, but I’d be lying if I said that I accept them as canon (no matter how much I love Paul Cornell). And my relationship with Terrance Dicks’ work is, frankly, complicated. Deadly Reunion in particular also makes keeping track of the Brigadier’s timeline basically impossible.

******Obviously, when they were making these stories, they had no idea that this show would last as long as it did, much less that it would be brought back and more popular than ever fifty years on. So they didn’t really give a shit about things like continuity. There are about a million issues around the dating of The Invasion anyway so it was all doomed from the start, really. I know that no one really wants to have the debate about UNIT dating anymore, but let’s be honest here. We’re Doctor Who fans. We like to debate. We like to argue. We’re really good at it. And what makes for a bigger argument than this?

******Joining these delights on my Alternate Universe shelf are Daleks in Manhattan/Evolution of the Daleks and Eric Roberts as the Master. Because just…no.

And a tiny part of me wants to add Scherzo to the list just for scarring me for life. But I won’t because Zagreus is far too precious to me.