Hi everyone! I took some time off of the Challenge because of a busy week at work. Then it turned into almost two weeks. Oops. Does anyone else suffer from writing inertia? When you write every day, it’s easier to keep writing, but when you stop it’s hard to get started again. That’s just what I’ve decided to call it – writing inertia.

Anyway, it looks like I took a long time to decide on today’s topic, but I’ve known what I wanted to do since day one. I’m interpreting “ship that could never be” to mean a ship that you like but won’t ever happen in the show. My ship is

The Doctor and Jack Harkness

Who knows how many more hundreds or thousands of years the Doctor will live? And we know that Jack will be around for a looooong time. It makes sense that they could meet up over the years and become very close. It’s so hard for the Doctor to leave behind people he cares about, but that wouldn’t have to happen with Jack. I can see a similar situation as Doctor/River, where they meet up, not always in the same order, and have to sync their journals.

I also would just like to see John Barrowman back on the show. 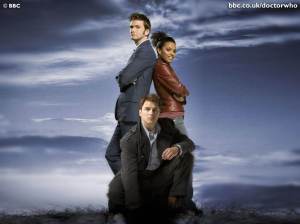 Plus, there’s some support for my ship, see?

I’ll admit that I would really like to see 10/Jack.

However, I don’t think this pairing (Jack with any Doctor) will happen in the actual show. I’m not really sure why I think that – just a gut feeling. There are so many unknowns for Doctor Who over the next few years. I’m hoping they will go in a totally different direction with the new companion, new show runner, and eventually the next Doctor. I would actually like to see them stay away from romance for a while, as it complicates things. In the future though, (perhaps way in the future) I’d like to think that Jack and the Doctor get together. Even if they are only friends, both characters could really benefit from having someone they can always count on, through all of time and space.