We’ve talked before about companions that are grossly underappreciated, right? Of course we have. It’s something I tend to witter on about quite a bit. But there are other characters who sort of walk that line between being a companion and not being a companion. It’s more common in New Who than in the Classic series. Since the show came back in 2005, there have been several. Mickey Smith, Wilfred Mott, Danny Pink, etc. They’re difficult to categorize and are sometimes the subject of furious debate as to which side of the line they fall on. But as I said, this didn’t really happen as much in the Classic years. But I think if anyone qualifies as pseudo-companions, the men and women of the UNIT years fit the bill.

And probably more to Sergeant John Benton more than anyone else.

Benton appeared onscreen with three consecutive Doctors, beginning with Patrick Troughton in The Invasion (1968) as Corporal Benton, and ending with Tom Baker (his last onscreen appearance was in 1975’s The Android Invasion, where he had been promoted to Warrant Officer Class 1, holding the post of Regimental Sergeant Major). He sort of served as Troughton’s companion in the 10th Anniversary Special, The Three Doctors, and had what I think was one of the better reactions to the inside of the TARDIS, and to time and space travel in general.

He had a lot of mishaps over the years, I’ll grant you. For instance, he was beaten up by invisible forces in The Daemons, and was regressed into a baby in The Time Monster. A bit ridiculous, yes, but as we all know, shit happens when you run with the Doctor. Especially when you’re a member of UNIT.

But Benton always did what needed to be done, whether it was calling cat-sized maggots to their tea or letting the Doctor knock him out to stage an escape. Or wearing those completely awful Season 7 UNIT uniforms. To me, John Benton was the heart and soul of UNIT every bit as much as the Brigadier. 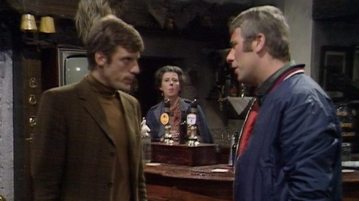 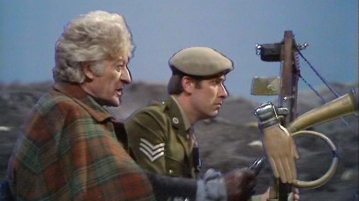 Yes, that’s right. Keep your Captain Yates because I’m not interested. I just love Benton to bits. Sure, he was the comic relief in a lot of situations. And he was always inexplicably the underdog to Yates. But Benton was always there, always brave, always loyal, and always underrated.

Are you a Benton fan too? If so, and you haven’t already, check out Council of War from Big Finish featuring the man himself.