Hello! This is Erin, who you haven’t heard from for a while. After a bit of a (long) break, I’m hoping to start posting regularly again. I have a couple of new projects to write about! Kat and I are going to Chicago TARDIS in November and the guests include Peter Davison, Colin Baker, and Sylvester McCoy, aka the 5th, 6th, and 7th Doctors. So, I figured that I should actually watch their seasons. I have seen a few 7th Doctor episodes but nothing from 5 or 6. Then, I had the (maybe overly optimistic) idea that I could knit up the Season 18 scarf in the same time span. I always knit while watching TV so these two things naturally fit together. I decided to document the process for anyone who’s interested in knitting or wants to laugh at my paltry knowledge of Classic Who 🙂

I’m excited to finally knit this scarf. I bought the yarn a few years ago but the scarf is sort of a daunting prospect. If you haven’t seen it, it’s even longer than the one from Season 12 which seems to be the most “famous”. Knit in heavy chenille yarn and almost 20 feet long, it’s the perfect winter weather accessory if you ever happen to find yourself in Antarctica.

Sadly, I’ll be skipping Season 18 for now. I already need to watch 4 serials a week to be done by Chicago TARDIS time which sounds like a good amount. I’ll plan to post updates twice a week on my progress with the scarf and Classic-Who-watching.

I started out with Castrovalva which was a little confusing since I missed all the events leading up to the regeneration scene. I’m used to seeing Roger Delgado as The Master in Classic Who so seeing Anthony Ainley threw me for a loop as well.

At first I didn’t know who the companions were but they eventually said all the names so I figured it out 🙂 So far I like Tegan and Nyssa. I’ve always heard about how awful Adric is but I didn’t think he was that bad (yet?)

I got anxious as the Doctor started to unravel his scarf. I almost had a heart attack when I realized he unraveled the WHOLE THING! I texted Kat, horrified. A quick calculation shows that’s over a mile of yarn, which puts into perspective the length of the sprawling TARDIS corridors. With that distance I begrudgingly acknowledge that it was a good idea to use yarn to mark his path.

Overall I really loved Castrovalva. It had lots of great science-y things like the Zero Room and spatial distortions. I thought Event One had to be referring to the Big Bang but Nyssa kept talking about the creation of the galaxy. This could be a mistake from the writers, but I know that in the late 70s – early 80s astronomers were just starting to work out the mechanics of galaxy formation. Today the evidence points to a slow, gradual process lasting many millions of years. Either way, it’s not an ideal place for the TARDIS.

I enjoyed the references to recursion and the M.C. Escher-style stairs leading to the square. I liked the music too – very peaceful. I like Peter Davison so far, and of course I love his outfit with the stripey pants and the jacket with orange trim. 5/5 stars, would watch again (and probably will).

For the scarf, I’m using the pattern from http://www.doctorwhoscarf.com which has been a wonderful resource for my other scarves. I’ve just barely gotten started and I didn’t actually knit while watching Castrovalva so my next course of action will be to time how many rows I can knit in one episode.

Next time I’ll talk about the serials Four to Doomsday and Kinda, as well as scarf colors! 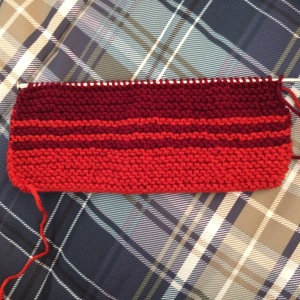