And occasionally there was a budding romance. My absolute favorite of which was between Ben Jackson and Polly Wright.

These two companions are seriously underrated, I think. They are at a complete disadvantage though because of the nine serials they appeared in, only ONE still exists in its entirety–their very first story, “The War Machines”.

Ben and Polly were with the First Doctor when he regenerated into the Second Doctor, and pretty much did that first-ever meeting with the Cybermen without him. They then continued to travel with Patrick Troughton’s incarnation of the Doctor until he and Jamie eventually returned them to 1966–the exact same day they left, though a whole year had passed for them.

But how did their story begin? In a London nightclub in 1966. Ben was a Royal Navy Sailor and Polly was a secretary who attempted to cheer him up, along with the Doctor’s then companion, Dodo. They both end up in the TARDIS and there begins the real story of the sailor and the Duchess.

Their relationship is a balancing act of banter and flirting. Not unlike many other relationships we see throughout all of Doctor Who, to be honest. It’s clear that they grow to care for each other, despite how snarky they can be towards each other. And Ben is often quite patronizing too, but that’s probably to be expected. Polly solves a lot of problems, though (often by accident while making coffee), and Ben is usually impressed after he gets over first being incredulous.

They are just fun to watch. And to read, really, since in order to get their full story you have to read the novelisations. But I urge you to watch “The War Machines” and see how their story begins. Michael Craze and Anneke Wills are so incredibly lovely together.

They’re also arguably the best looking pair to ever enter the TARDIS. 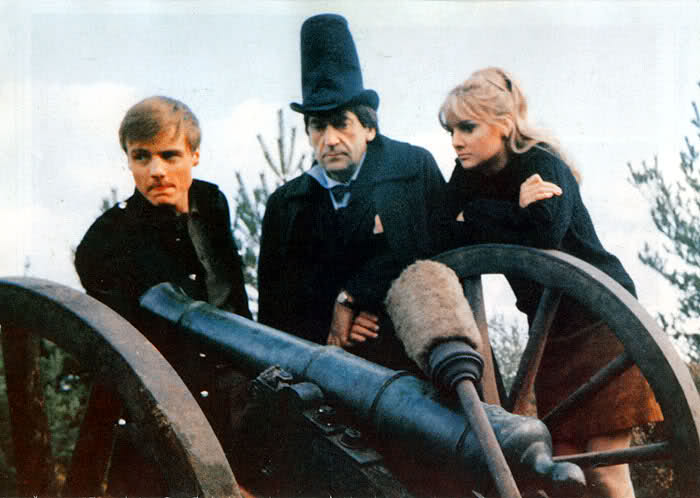 There are different versions of how their story goes after they stop traveling in the TARDIS, but it doesn’t seem to matter because either way they do end up together in the end. And they have been mentioned in the modern series as well, in a way. If you’ve seen The Sarah Jane Adventures, you may have heard their names at the end of the “Death of the Doctor” story. Sarah Jane mentions that she’s been tracking down other veterans of the TARDIS and that she found a Ben and Polly running an orphanage in India.

I love believing they got their happy ending.

If you want to read something far more eloquent and convincing about how amazing these two are, you absolutely need to check out Tansy Rainer Roberts’ piece about these two. She is utterly brilliant and does them far more justice than I ever could.*

And I totally agree with her on this one. I will go down with this ship.

Who would you choose? Are you Ben and Polly fans? Let us know in the comments!

* I hope she doesn’t mind me referring you to her. But the truth is that she said it all better than I ever could. Tansy, if you’re reading this, I love you!!