One thing I think the Classic era doesn’t get enough credit for is emotional impact. Especially in the days before Tom Baker. And that’s completely unfair because there are several amazing moments that are incredibly sad and beautifully written. The saddest of these are often the goodbyes, particularly for the companions. Think of William Hartnell’s goodbye speech to his granddaughter, Susan. Or the Second Doctor bidding farewell to Jamie and Zoe, knowing that their memories of traveling with him will be wiped. They’re heartbreaking.

But personally, the one I feel has the most impact is between the Third Doctor and Jo Grant in “The Green Death”. 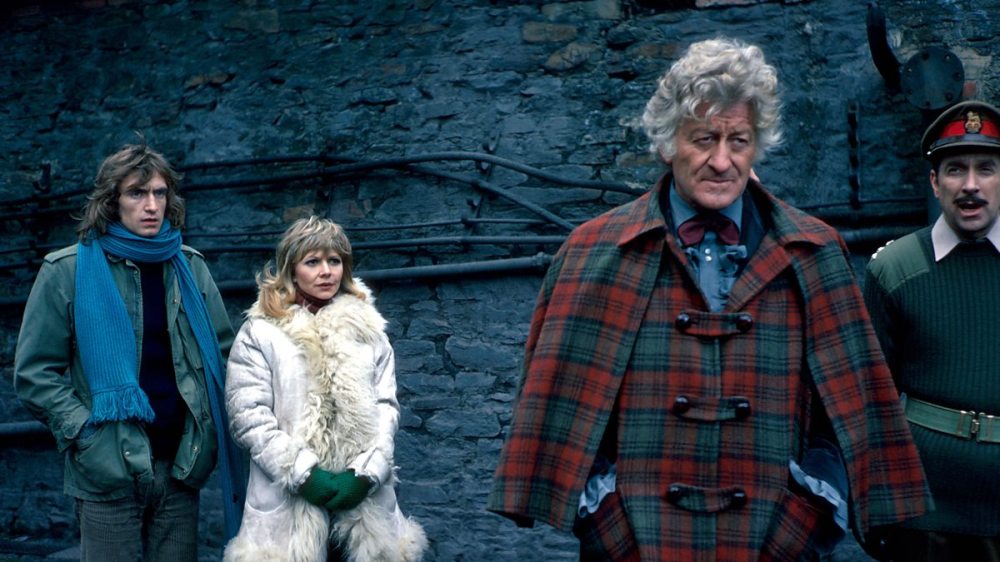 I’ve talked a lot about the Pertwee era in this challenge so far, and especially about the uniqueness of having such a large regular cast. And what you have to remember about this particular story is that by the time it comes along, the “UNIT Family” has been together for four years by this point, and Katy Manning had been a part of it for three of those years. Her relationship with the other cast members was exceptionally close—most especially between Katy Manning and Jon Pertwee—and you can see the emotional impact her leaving was having not only on the characters but on the actors themselves. There is a real undertone of melancholy to the way they played it, and there was never another companion exit story quite like it in the Classic era.

In fact, I would even argue that Jo Grant’s exit created a blueprint for the modern companion exit story. Think of the emotional impact of stories like “Army of Ghosts/Doomsday” or “The Stolen Earth/Journey’s End”  or the first half of Series 7 leading up to “The Angels Take Manhattan”  or “Face the Raven/Heaven Sent/Hell Bent” *. If you look closely at “The Green Death” and then at any of these New Who stories, I think you’ll find a lot of similarities.

By the time Jo leaves, we’ve really seen a complete companion journey. She’s actually grown up right before our eyes. The contrast between this story and where she started in “Terror of the Autons” is astonishing when you look at them side by side. Especially if you look at it in terms of her relationship with the Doctor. She is, without any shadow of a doubt, his very best friend in all of time and space. She’s a great deal more than that to him, though the definition of “more than” is something that people still argue about to this day. Some say he was romantically interested in her, others say his affection for her was more paternal than that. But that doesn’t matter. Whichever way you look at it, you can see the effect her leaving has on him.

And unlike other stories, right from the first moments of episode one, you can tell that this story is going to be different. They set up her leaving the Doctor right from the very beginning. He sits there wiring in the coordinates for Metebelis III while Jo’s going on and on about Llanfairfach and Professor Jones and Global Chemicals while reading the newspaper. Neither is listening to the other. And it takes several attempts for the Doctor to grasp the concept that, no, Jo isn’t going with him in the TARDIS. She’s going to South Wales to join Professor Jones’ fight for the environment. She even goes so far as to tell the Brigadier that he can’t stop her from going unless he arrests her. She’s even prepared to resign from UNIT.

Surely that should’ve been a red flag for everyone else and not just written off as another slightly overdramatic outburst, which admittedly Jo was sometimes apt to do.

Over the course of the story, you can see Jo not only drifting away from the Doctor and UNIT and into the arms of the Nutcake Professor, but also becoming the more strong, independent, and logical person that the Doctor was always pushing her to be. And Professor Jones was very clearly intended to be the human analog for the Doctor. Jo even goes so far as to say that Professor Jones reminds her of the Doctor, only younger. It’s no wonder the Doctor didn’t know whether to be flattered or insulted. **

The meat–or should I say special protein fungus?–of the episode, however, is really to be found in that final scene. First with Jo’s obvious sadness at saying goodbye to the Doctor and UNIT to go fungus hunting in the Amazon, to immediately being so surprised and excited that Professor Jones wants to marry her.*** The best part of this bit is the way Jon Pertwee played the Doctor’s awkwardness and sadness when he realized that Jo is being taken from him forever because she willfully chose someone else over him. It’s not social embarrassment at being an unintentional part of that private moment. It’s a very real sadness because he’s lost the girl. And his reaction just breaks your heart, which really isn’t something you come to expect from the normally stoic Third Doctor. And then a few moments later, in all the excitement of the party that begins around them, Jo’s quiet goodbye to the Doctor is just lovely. You can see they’re both terribly sad to be parting ways, but Jo is still excited for the adventure ahead of her. His gift of the Meteblis III blue crystal is lovely, as is his request for her to save him some wedding cake and saying they’ll meet again. And then he quietly leaves the party and drives Bessie off into the sunset, leaving Jo and her new fiance to celebrate with UNIT and the Nuthutch crowd.****

They did eventually meet again, of course, but not before he’d regenerated several times. If you really want to make yourself cry, watch “The Green Death” first and then immediately go to The Sarah Jane Adventures and watch “The Death of the Doctor”, where Jo Grant (or Jo Jones, I suppose) meets Sarah Jane Smith and the 11th Doctor. The reunion of those three characters is so beautifully written that I can ignore the fact that most of the rest of the story is a bit crap.

I also highly recommend buying “The Green Death” on DVD and listening to the last episode’s bonus commentary with Katy Manning and Russell T. Davies because they talk a lot about how important this story, and particularly the last scene, were for the cast and crew, as well as for the fans. No joke, they had me in tears by the end.

Which story or scene from the Classic era do you find saddest? Did you tear up as Jo and the Doctor said their goodbyes? Let us know in the comments!

* Yes, okay, Donna’s goodbye story had a lot of problems, even aside from the non-consensual memory wipe. A lot of people hate this story. But the point is, even if you had problems with it, it did have an impact and it was terribly sad to say goodbye to Donna that way. And even though we technically saw her again later, we still said goodbye to the person she was while she was traveling with the Doctor. And that is incredibly sad.

Even though “The Angels Take Manhattan” was technically the leaving story for Amy and Rory, I think everything from at least “Asylum of the Daleks” up to their last episode should be counted as their long goodbye. It’s not really unlike the foreshadowing throughout Series 2 that lead up to Rose’s goodbye, and basically all of Series 9 leading up to Clara’s departure, which in itself had one hugely long 3-part goodbye story.

And if you’re wondering why I left Martha out, the reason is very simple. Martha never got the goodbye she deserved. Actually she never got anything she deserved. I love Martha and I think she could have been an incredibly well-rounded brilliant character. But the writers wouldn’t let her. Even when she got some amazing moments, and she occasionally did, the Doctor always overshadowed them and ruined it for her because he treated her so badly while he was being emo and brooding over Rose. And I think it was stupid to make Martha so hung up on being in love with the Doctor and her character suffered for it. Freema Agyeman did an amazing job with what she was given, but I think she was in a completely unfair situation. I was sad to not have anymore time with the character, but I was not sad to see her get away from the Doctor because she deserved something better.

There, that’s my Martha rant.

** In my mind, this sort of settles the “romantic vs. paternal” argument, but maybe that’s just me.

*** And you have to remember that even though this seems incredibly quick and foolish, this story was meant to be watched over the course of about six weeks. If you remember that, it doesn’t seem quite so rushed.

**** If you watch Jo meet the others in the background, her goodbyes to the Brigadier and Mike Yates are quite sad as well. You can see in Nick Courtney’s face that he’s sad to see Katy go. And it wasn’t played as much as it could’ve been because of production decisions, but you can see an awkwardness there that’s perfect because Mike didn’t get the girl he was originally intended to get. Poor Mike.