I’ve been working VERY HARD to stay away from Doctor Who spoilers as much as possible. I’ve abandoned my Tumblr, I’ve unfollowed all the Doctor Who things on Pinterest, and I’ve checked into Twitter maybe a handful of times in the last five months or so. I’ve been suffering a fair amount of Doctor Who related depression since the departure of my beloved Clara Oswald, and I needed a break.

So I’ve been out of the loop. And it’s been sort of nice. 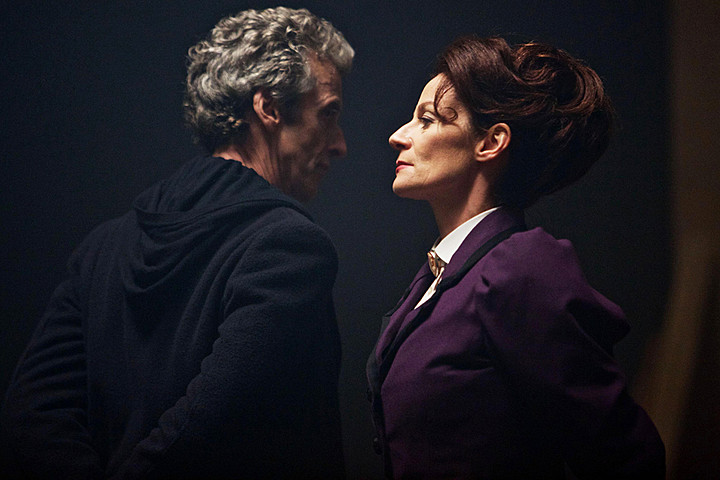 Some news, however has been unavoidable. At Chicago TARDIS a few months ago, Michelle Gomez revealed she was returning for Series 10, so that was a spoiler. And on the day Peter Capaldi revealed this series would be his last, no less than seven different people texted me in the span of about two minutes to make sure I knew about it. That one would’ve been impossible to avoid though, so I can live with it. But then I accidentally stumbled onto the news about the Ice Warriors returning while I was looking for something Big Finish related. So obviously my methods of avoiding spoilers haven’t been hugely successful.

“I think this is the BRAVEST thing that Doctor Who has done since the show came back in 2005.“

But then there’s this latest reveal. The return of the MONDASIAN CYBERMEN. The PROPER Cybermen. The SCARY Cybermen–and I’m completely over the moon about it!! This particular return is not exclusive to Peter Capaldi’s wish list, but I’m ever so glad they’re making their return with him. It’s been on my own wish list for longer than I can remember, and I know I’m not alone. But did any of us actually believe it would happen? I certainly didn’t. I had to stare at this picture for ages before it finally sunk in. It’s really happening. And personally, I think this is the BRAVEST thing that Doctor Who has done since the show came back in 2005. And that’s saying something.

Because we’re all used to the new “Cybus” Cybermen nowadays, aren’t we? I say “used to” but what I actually mean is “resigned to”–which I grant you is just my own personal opinion, so take it with a grain of salt. Or rather gold dust, which may be more appropriate, in this case. Or a swig of acetone, perhaps. Your choice.*

I’ve never been shy about my genuine hatred for the Cybus Cybermen. First they were boxy and clunky and said “delete” all the time and were about as uninteresting as it’s possible to be. Not one organic component in sight. They’re just robot suits housing human brains. A slightly chilling concept, but it still doesn’t come through in practice.

Then, once Neil Gaiman got his hands on them with the intent of making them scary again, they remained fully metallic, but became a bit sleeker, faster, and able to upgrade to overcome basically anything. A valiant effort, but still not quite achieving the desired effect. Bonus points though for the fully rotating head and the Thing-style hand drop. Nightmare in Silver unquestionably had the creepiest Cybermen moments in all of New Who at that point. And as of the events of Dark Water/Death in Heaven, they can fly, which shows me little more than one of them has seen an Iron Man clip at some point and their little hive mind thought that would be a good idea.

However, they can convert the dead now, which I will admit appeals to my rather macabre sensibilities quite nicely and is the only thing about them I find interesting. Though converting Brigadier Lethbridge Steweart post-mortem went too far for me. Some things should be sacred. No offense, Danny Pink, you were lovely and all but you’re not The Brig.

Anyway, even with this delightful new ability, the Lumic-born Cybus Cybermen are just not as interesting or scary as the Mondasians. The Mondasian Cybermen were far more organic–at least at the beginning–than the Cybus ones have ever been. The ones we met with the First Doctor, Ben, and Polly at the South Pole in 1986 still had human hands, and their faces were merely covered with cloth. Some viewers who are more accustomed to the fully encased Cybus Cybermen may laugh at this and say it looks cheap or cheesy. But I’ve always felt that it was the organic bits that made them so scary. It made it more obvious that they used to be…well, us. There was still a bit of human leftover as a reminder. And it was terrifying. Especially in black and white, which always lends a spookier atmosphere. But I still think it will work in color. I mean, look at them. They’re gorgeous.

And, oh, those voices!

That’s not to say that every version of these Cybermen were perfect. Personally, I don’t really like any version of them post-Invasion. And despite how cool they looked marching down the steps at St. Paul’s**, even they had some issues, to be honest. Maybe it’s the boxy headshape? It’s iconic to say the least, but tactically speaking it may not have been the best design choice. Hello, I’d like to speak to the Cyber Planner in charge of upgrades, please? Yes, thank you, I’ll hold.

Anyway, the point is that they become a bit comical for me from that point on. They’re still largely entertaining, but they’ve lost something. Though I will admit here and now that I’ve still never made it all the way through Silver Nemesis, so I suppose my analysis isn’t technically complete. But I think the reason even these Mondasian Cybermen became less interesting as time went on was because they lost the organics. And that combined with their new square heads for some reason made them look less intimidating to me.

That being said, I’m still appreciative to have them back in any form. All we’ve had so far in the new series are quick shots of the Mondasians. But one of them did give Kate Stewart one of her greatest moments on the show thus far.

“Sorry, you left this behind on one of your previous attempts.”

But now I look forward to meeting them properly again. And also to seeing the reaction of those who will be meeting them for the first time. My 5-year-old goes back and forth on watching New Who with me because for whatever reason she usually prefers the “old black and white stuff” as she puts it. Partially because she’s quite fond of Patrick Troughton, I think, but she really does love the old Cybermen. I’m especially anxious to see what she makes of their return.

Would I have much preferred to be surprised by this news? Hell yes. If they had found a way to keep this quiet and then reveal them only when the story actually aired, I could almost guarantee that I might have exploded from both surprise and sheer delight. My heart and my brain would not have been able to take it. But what a way to go!

I’m desperately anxious to see how this plays out, and my wish list for how they treat them in their return story is quite long. Still, it’s made me look forward to Series 10 that much more, even with the bittersweetness of it being Pearl Mackie’s first and both Capaldi and Moffat’s last. But one thing is for sure, I bet it will be one hell of a ride.

So what do you make of the news? Are you excited to see the Mondasians make their return? Or will you champion the Cybus lot instead? What else are you looking forward to and or dreading in Series 10? Let us know in the comments!

*No, I will not stop making terrible Classic era Cybermen jokes.

**So cool that they recreated the same shots in Death in Heaven, you may recall.